Whether you like your Tuesdays Fat, Super, or SuperFat (personally I prefer Black Tuesday: October 29th, 1929; the day of the Great Stock Market Crash of 1929…good times), there’s no denying one simple fact about this magical Tuesday: you are on the internet with too much free time on your hands.

I know it’s been awhile since you’ve heard from me, but it’s because I put myself on blog-writing probation out here until I found a job. The theory being that if I had let myself get distracted with less-important things (such as blogging, facebooking, etc.), that I wouldn’t devote enough time to the more-important things (such as finding a job, paying rent, eating, etc.). BUT, I am glad to say that I have found gainful employment out here (much harder than it sounds), which means I can get back to blogging my heart out to the six (or fewer) of you who are out there reading this! Hooray! High fives all around!

So with all that tomfoolery out of the way, on with the updates!

-I Left a Corporate Job in a Cubicle for a Corporate Job in a Cubicle…in a Skyscraper-
I’ll kick off the updates with info about my aforementioned employer. I work in the HR dept. (that’s Human Resources department to those of you still in school) of UCLA Medical (that’s University of California: Los Angeles to those of you still in winter) as a lackey to the HR Director (that’s slavemaster to those of you still in the free world). I’ll spare you the boring details of my job, but the basic idea is this: UCLA Medical is building a new hospital opening in April-ish, and between now and then they’re hiring a ton of new people to work in said hospital. My job is to help the HR Director lady make sure all these new people get oriented properly and that they are fooled into thinking their jobs are much more fun than they actually are. All things considered, it’s a pretty sweet gig, with an even sweeter view overlooking West LA from the eighth floor of a 100,000-story building (according to my best guess). The downside is that it is literally on the opposite corner of the city from where I live, which means I’ll have about a seventeen-hour commute every morning to get to work. But I suppose that’s better than being homeless (ask me if I still feel that way after driving it for three months).

-Oh, Excuse Me, But I think You Dropped This Name-
Look, I’ve tried to fight it for years, but I’m just going to stop pretending and embrace it: I’m a Name-Dropper. I know it’s like the most annoying thing in the world, but I can’t help it. It doesn’t matter how unimportant or unknown the person is, if I run into Damian Lewis (the main guy in HBO’s Band of Brothers, props to T-Gates for spotting him) at The Apple Store, or meet a girl who was in Wedding Crashers at a frat party, or have a sitdown with the creators/writers/actors from It’s Always Sunny in Philadelphia, I’m going to tell you. I’ll do my best to try and kick this habit, but until then, expect me to base 100% of my self-esteem on how many D-List celebs I can stalk in a week. Cheers.

-I Prefer British Idioms to American Vernacular-
Let’s face it, when it comes to the English language, the Brits got it spot on (I mean, English is named after their country for crying out loud!). Don’t get me wrong, I love shouting “wazzzzup” at my homies and prefacing all my sentences with the word “dude” as much as the next guy, but you just can’t beat phrases like “cheers, mate” “bloody hell” and “bangers in the mouth.” So my advice to all of you is to start working as many British words into your vocabulary as possible. Don’t barney me like a berk on this one, you’ll sound cooler, classier, and all your mates will be impressed by you quicker than you can say “Bob’s your uncle!” …And let me know how long it takes before you get your arse mullered by the rozzers.

-A Formal Apology to My Posse-
Now that I’ve updated and enlightened you a smidge, it’s time for me to apologize officially for being so lackadaisical about answering/returning phone calls. I really want to catch up with and talk to all of you, but in between job-hunting, running around the city and the East/West time difference, I haven’t been doing as good a job as I should be. No worries though, I intend to fettle that situation straightaway.

-Rock Out With Your Barack Out-
Today (Super Tuesday) is a big day for people who care about the world of politics (which isn’t me), and even though I maintain my vast disinterest in the political realm, I thought I’d say that at this point I think I’ll be casting my vote for Sen. Obama, unless I see fit to change my mind betwixt now and November. I usually try to avoid politics of any sort because I believe that everyone is lying and altering the truth to work in their favor, but the presidential election is always a big one, and I like to have some idea of who I’m voting for and why rather than pick blindly. I’m definitely not voting for Hilary, and McCain, Huckabee and Romney have yet to show me anything impressive, whereas Barack seems like a solid, energetic dude with some good plans for governmental cohesion. That’s good enough for me.

-From UALC to UCLA to…-
At the referral of a couple of people whose opinions I respect, I’ve been hitting up a church out here called Bel Air Presbyterian on the Westside. I like it a lot so far, and it reminds me a lot of the Xalt service at UALC (though the people aren’t as cool, obviously ;). I have pretty engrained spiritual/religious views, but the Presbys of Bel Air seem to have their heads screwed on straight, spiritually speaking. I’ll let you know how this new church relationship progresses as I explore where God wants me to be out here.

-Peyton Was Just Being Polite When He Clapped-
I don’t want this post to degenerate into an endless stream of swearwords, so I’ll keep my comments on Superbowl XLII (or Amateur Hour) as brief as possible:
Eli Manning is not a good quarterback. He threw several shoulda-been interceptions (someone tell Asante Samuel to practice some catching drills in the off-season), managed the offense poorly, and made some truly awful in-game decisions. But thanks to David Tyree’s incredibly athletic circus catch in traffic, Eli’s 59.5 minutes of flaws are being overshadowed by one good play that was just as much luck as it was athleticism. As a lifelong pro/college football fan, I understand that luck is just as much a part of the game as the stripes on the field, so I’m not suggesting the Giants should be stripped of their title, I’m just saying that if the Pats/Giants played ten games in a row, the Pats would win 9/10. Unfortunately for Patriots fans, the one that they lost just so happened to be the Superbowl. And Tom Brady (hands-down best quarterback currently in the NFL, and will likely surpass Favre as the all-time greatest if he chooses to stay in the league long enough) got about as much support from his O-line in that game as Vick got from PETA to help pay court costs. Credit the Giants D Coordinator for keeping pressure on Tom “Eli Wishes He’ll Ever Get to See 18-1” Brady, but as the offensive line, it’s your job to give your QB the protection he needs, regardless of how many people are blitzing however often. You can’t let your quarterback get sacked, hurried, and knocked down for the entire game, then expect him to trust the pocket enough to make the plays he needs to lead you to a comeback victory. Even a perfect QB (and Brady’s close) wouldn’t make passes while buried shoulder-deep in the turf. Oh well, there’s always next season. Maybe the Bengals will make the playoffs finally and then I’ll REALLY have a reason to gripe when they get pounded.

-Does the Facebook Bumper Sticker App. Ever Work Properly for Anyone?-
I admit it. I’m a full-on facebook addict. I’m in a support group (on facebook) that’s trying to help me, but so far, no dice. As a true facebook connoisseur, my biggest pet peeve is when simple facebook applications simply don’t function for what is apparently no reason. This annoying problem is most prevalent in an app called “Bumper Sticker.” I get bumper stickers multiple times a day, but whenever I try and view them or send them to my buddies, 99% of the time, the application just sits there and does nothing, or it freezes, or it goes blank. Now look, I’m not asking for full perfection or awesome graphics or anything, all I’m saying is that if you’re going to make an application, just make sure it can actually do what it claims to. If it can’t, no big deal, just don’t put it out there for the world when you still need another six months to work out the bugs, ok? Ok.

Well gang, it was another long one, so props to you if you stuck around to the end, and I’ll try to have shorter, more frequent (and hopefully less boring) posts for you Interneters in the near future! 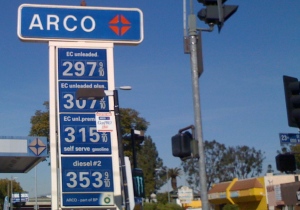 Apparently these are the ridiculous Californian gas prices I was warned about…yet this is cheaper then what I’ve paid in Ohio before. Funny, that.