What Does The E Stand for Anyway?

This may come as a shock to you, but when I go to the grocery store, I’m going for milk. Maybe some cereal and the occasional can of soup (I know, I’m not much of a chef), but you get the idea: groceries. When I go in to an electronics store, I’m going to try out the latest gadget or gizmo that I can’t afford, or buy the game that everybody else got six months ago. The point is that I don’t go to an electronics store to buy milk, and I don’t go to a grocery store to buy HD televisions.

Which is why I get so frustrated with the way that ESPN tweets (watch as I turn that non-sequitur into just a sequitur with the power of…writing!). I am a sports fan — I might not look it, but I am — and so when I go to social media for sports updates, that’s what I want. Sports updates. News, trade rumors, the latest scores, facts, historical notes, interesting stats — that’s what I want from my sports social media. To the best of my knowledge, I’m in the majority with this sort of thinking. Now, generally, organizations are self-aware enough to realize that this is what their audience is looking for, and they happily deliver. A sort of unspoken social contract of “you give me the info I want and I’ll give you my attention”. Attention is a valuable commodity (arguably the most valuable commodity of our day), and so organizations are usually careful to abuse or waste this sort of thing. For instance when I follow Variety for entertainment news, that’s what they give me: new trailers, insider industry info, contract upheavals, castings, awards coverage, etc. They provide the facts and current info as is, without needless speculation or silly half-witticisms. Unfortunately with the ESPN twitter account, this is only true part of the time.

Some of the time, I get exactly what I want from ESPN’s social media: headlines, scores, trades. But then some of the time I get this ridiculous, half-editorialized faux commentary that reads like my little sister’s tweets (no offense, Alissa). My sister is allowed to tweet like a college-age girl because she is one. The worldwide leader in sports is not. If I wanted to follow someone’s opinions or half-baked witticisms on sports, I’d follow sports writers or anchors that I like. When I roll my eyes at a sports tweet, I want it to because The Cavs lost or The Bengals made a terrible draft pick, not because whoever runs the ESPN twitter is trying to be clever.

Disclaimer: Of course, I understand that I can unfollow at any time, and ultimately I bring all this on myself, but it’s almost July 4th and nothing is more American than complaining about something asinine that you have total control to stop/avoid at any moment. Also, please bear in mind that we are fully in the uncharted depths of the pet peeve zone, so I understand if this seems arbitrary or irrelevant to you. Just chalk it up to one of those things I needed to get off my chest.

With that in mind, I present: 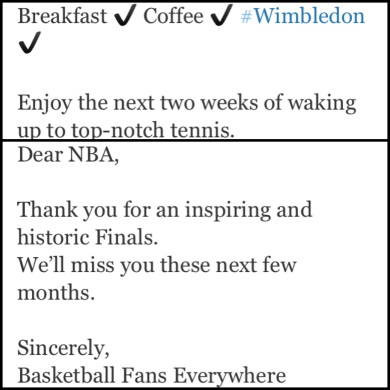 Ok so let’s kick off the rant strong: I hate it whenever ESPN talks like it’s our own voice. I am my own person, I don’t need the twitter account of a sports website to try and speak for me. Specifically I don’t need it to imply that I’ve ever gotten up and intentionally watched tennis. Secondably, the NBA made tens of billions of dollars off of me and “Basketball Fans Everywhere” this year, so I think that’s thanks enough. Good rule here, just don’t put words in my mouth. There are plenty there already.

I file these in the “Okay, so what?” category. Why are you just saying random, obvious, unnecessary things, true or not? The ESPN twitter has sent almost 50 thousand tweets, do we really need to add to the cacophony with idiotic thoughts like “Tuuka Rask is a ninja in goalie clothing” or opinions on whether or not Tim Duncan wears a headband.

No I do not feel different because tonight is game seven. You know who feels different? People playing in game seven. Maybe even a few people attending game seven. You know who doesn’t feel different? Ninety-nine percent of ESPN’s 6.7 million followers. Me? I was going to work that night, so I felt pretty much the same. Part II: Give me a stat, give me info, don’t make some asinine comparison between Cap’n Crunch and a sports team captain like a bad comic on open mic night. Part III: Spoiler alert: pretty much EVERY professional athlete is more of a man than I am, I don’t need you to tell me that. That’s why I watch sports, because the guys playing are better men than I (athletically speaking, at least). A league with a bunch of dudes who were like me playing would be about as interesting as the WNBA (and even most of those women are better men than me, athletically). 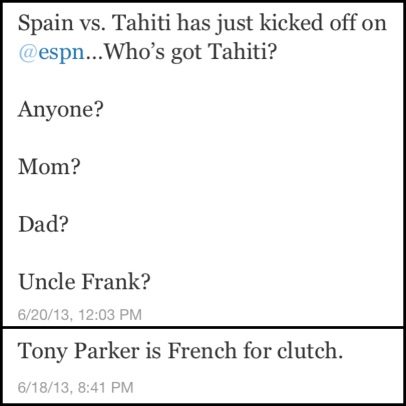 Yeah, we get it, Spain v Tahiti isn’t going to be a very competitive match. Maybe instead give us the year since Tahiti last beat Spain, if ever. Or something useful. And again in the second one, give me a stat on Tony Parker or a game update or just pipe the eff down. Save the “clever” tweets for whoever writes for The Onion.

Yeah, I get it, part of your job as a social media outlet is to try and engage and connect with fans. But phrases like “K, thx”, needless shout outs to Manu Ginobli, and tweets with a “OMG can U believe it??” vibe are what I look to my friends for, not the world’s most renowned sports news organization. And actually I’d unfollow any of my friends who tweeted like that, too. 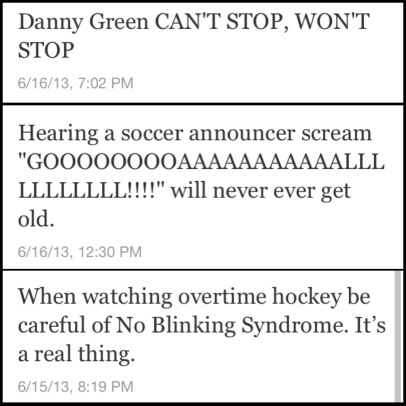 STOP TRYING SO HARD TO RELATE TO ME. First of all, you’re off base on all three of these tweets. Second, just no.

Stating the obvious is like the phrase “goes without saying”. If it truly goes without saying, why are you saying it? Tweet II: a “would you rather” is best left for office icebreakers and bad first dates. Tweet III: Please keep all Air Bud references separate from actual sports please, those people don’t need any additional encouragement. This Air Bud tweet is about as good as any Air Bud movie (spoiler alert: not very). 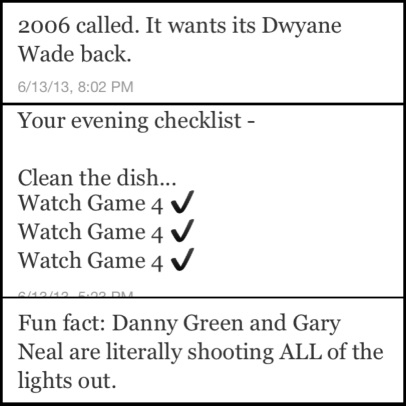 Any sort of “<_____> called, it wants its <related reference> back” joke is as dated as David Spade’s career (both peaked in the early 90s). If you MUST try out material on us, at least make it more current than the first Bush Administration. Second, who is actually cleaning their satellite dishes in prep for a playoff game? Is that even a thing? And for the last time, stop freaking telling me what I’m gonna do with my time.

A) No they do not. B) No it is not. C) To quote Chris Farley (since early 90s seem to be all you understand), “Kindly shut your big YAPPER.” 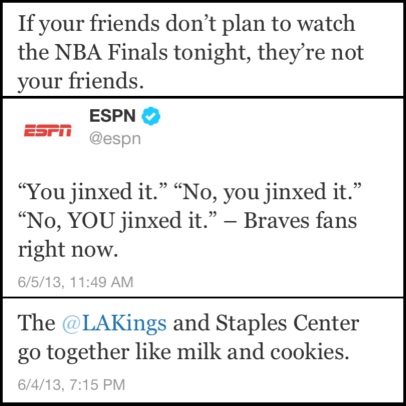 Ok seriously what the f*** are you even going for here? I love the NBA Finals. You know who doesn’t? Most of my friends. Part II: Nobody cares what hilarious conversation you picture Braves fans having is like. Part III: Outside of maybe like Wrigley Field, Cowboy Stadium, and maybe a small handful of other places, nobody gives a rat’s ass about where a team plays. All they want is the newest, nicest place to root for their team. Also you know the Staples Center is home to like, three other professional sports teams, right? Does the Staples Center and the Lakers/Clippers/Whatever WNBA team plays there not go together? 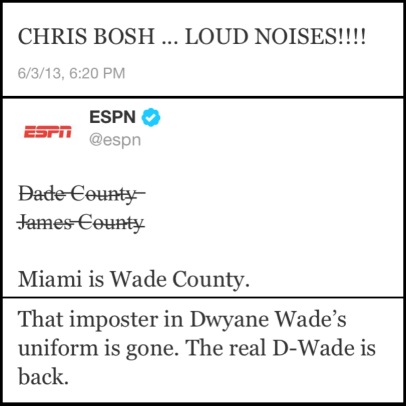 Come on dude, really? I like Dwayne Wade as much as the next guy (probably more), but like, he’s a dude in his 30s who had a couple off games after playing 100 this season. Why would it kill you to just tweet, “Dwayne Wade having a killer comeback game, 17pts & 4rbds in the 3rd quarter” or something? 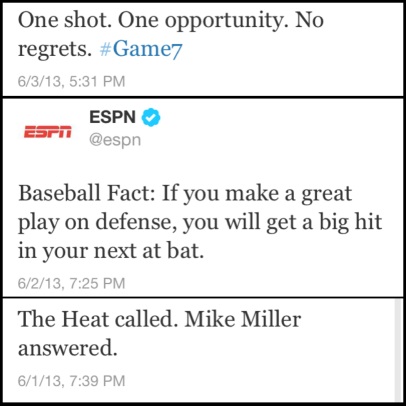 Any even casual sports fan understands the importance of a game seven. You’re not getting me hyped, you’re getting me annoyed. What an arbitrary, stupid attempt at a clever factoid. More of the “So and so called” material. If anything, Mike Miller seems more like a texter. Also nice to see that ESPN can’t be bothered to tweet out any stats with their 120 remaining characters in that tweet.

…I only pulled this handful of offending tweets from the last three or four weeks of their tweets, mostly because I couldn’t force myself to go back any further. Hashtag first world problems.

To give credit where credit is due, a large percentage of ESPN’s tweets ARE exactly what I’m looking for: dry, to-the-point sports coverage of the action I care about. But every time I see one of these tweets come through it makes me roll my eyes harder than that episode of The Bachelor my roommates forced me to watch (and by forced I mean politely invited and I stuck around for the whole two-hour ordeal. The eye-rolling bit is true though).

I guess the moral of the story is, you’re welcome to try and sell your electronics in the grocery store, just don’t be surprised when some curmudgeon like me comes along and pours sour milk all over them.

…Want more Mind Bullets? New posts go up every Wednesday at noon PST (or as close to that as I feel like), and you can subscribe if you want them delivered right to your inbox. Or if you’re too impatient to wait that long you can follow me on twitter, instagram, youtube (new videos every Monday), and my boring personal website. Whew, that’s a lot of self promotion…even I don’t like me enough to keep up with all that.