A couple weeks back in my WILDLY POPULAR PODCAST (available on both iTunes, this incredibly futuristic podcasting site, and youtube if you’re more of a vodcast guy/gal), I mentioned something somewhat briefly, but I wanted to make sure it got the appropriate amount of attention:

We are in the middle of a summer blockbuster movie season that is pitching the PERFECT GAME! 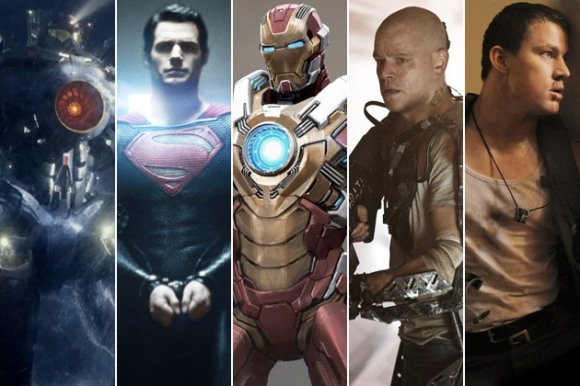 Here are several characters that I own zero copyrights to.

As my inner circle of close friends and court-appointed psychologists can tell you, my baseball analogies are a little on the weak side due to my limited knowledge of the game…that said, I’m pretty sure that in baseball, a perfect game is where the pitcher only throws strikes, and thus strikes everyone out in exactly 81 strikes. I also believe that this is somehow different from a “no-hitter” though I’m not really sure how, so I will stop embarrassing my friend Crocker by trying to guess.

But this is America in 2013 and we can’t just enjoy things, we have to qualify and quantify them as well, so here’s the rules/guidelines for how I’m monitoring this feat of moviemaking.

• The movie has to be a traditional summer blockbuster — your superhero flicks, massive explosions, overworked action properties, sci-fi/fantasy settings, budgets in the $150 mil+ range, big name stars, iconic reboots, opening weekends that line up with major holidays, projects Michael Bay/Brett Ratner/Bryan Singer directed (or at least considered directing), you get the idea…basically romantic comedies, animated features, indie films and anything based on a Nicholas Sparks novel need not apply.

• For the sake of this we’ll say “summer” starts with the first major blockbuster release (Iron Man 3 this year, May 3rd) and goes until…I don’t know, Labor Day? Which is like the first weekend in September, I believe. Let’s call it the 7th unless someone feels like googling it.

• The movies are judged as successes or failures based on the incredibly fair, accurate, and consistent judging system known as “however Dustin feels about the movie.” Basically if I liked it enough to not regret having dropped $15 on a ticket to see it, we’ll call that a win. Something in the B, B+ range on the Heveron Grading Scale aka the HGS (a term I won’t use again but wanted an acronym for anyway).

• Box office gross, critical reception and public opinion do not matter to me and will not effect whether or not a movie counts as a “strike”. I don’t see a penny of the billions of dollars movies make, most critics are idiotic and have lost the passion you need to actually enjoy movies, and the general public are morons (no offense, general public…but Two and A Half Men didn’t become America’s Most Watched Sitcom because I watched it, so that’s on you).

…Ok I think that’s everything in terms of rules. Now just to recap for those of you who don’t see movies as often as I do, here’s the blockbusters so far (as I count them), in order of release.

The Strikes (So Far) (keeping in mind that in this analogy, unlike your driving record, strikes are a good thing):
Iron Man 3 (May 3rd) — A quality end to the initial trilogy (I’m sure Iron Man 4 is already in the works, and I know Avengers 2 is), Robert Downey Jr. continues to be the most fascinating and entertaining current character in the action/comic/sci-fi/fantasy genres, and this installment felt like it was a complete and satisfying end to the trilogy while still leaving room to revisit the characters in future movies.

Oblivion (April 16th) — Okay I’m gonna break my own arbitrary rule here to include a movie that fits every qualification for a blockbuster except release date. It premiered a little earlier than the others, but you can’t fault movie producers for not wanting to debut their original property alongside heavy hitters like Star Trek, Iron Man, Superman, Will Smith, etc. Interesting concept, cool movie, intriguing without being too convoluted. Oblivion was either a good summer blockbuster, or a really long recruitment video for Scientology. Either way, I dig it.

Star Trek: Into Darkness (May 17th) — I liked the first Star Trek movie (of the reboot era, I don’t particularly care for the originals) and this one does a great job of living up to its predecessor, even if it doesn’t surpass it. Fun, good ensemble acting and writing, and JJ Abrams doesn’t go too nuts with any alternate-dimension/time travel/the-island-is-purgatory tropes here, so it’s a fun ride. And will probably be a literal ride at Universal Studios by 2015.

Fast & Furious 6 (May 24th) — Okay, maybe it’s not great — even in a perfect game there’s a few pitches that hug the edge of the strike zone but still qualify — but it’s the best film of this franchise since the original. Granted, that’s not saying much, but anytime you can make a SIXTH movie in a series and have it open to over $100 million, you must be above average (albeit just slightly).

The Hangover Part 3 (May 24th) — I don’t really count bro-comedies in the same category as the rest of these blockbusters….and it’s a good thing I don’t, because I heard this movie isn’t great, and I’d hate for it to ruin a potentially perfect game for the rest of us.

So that catches us up with movies that have been released thus far, now here’s the next few in the pipeline, hoping to keep the streak alive.

On deck:
After Earth (May 31) — Will Smith, summer movie, $200 million dollar budget. What more do you need to know? This movie will be good, because Will Smith doesn’t make bad movies. Even the fact that his son Jaden and M. Night Shyamalan are involved (both of whom DO make bad movies) won’t stop this one from being a successfully above-average joyride.

Man of Steel (June 14th) — This is your make-or-break knuckleball of the bunch…Man of Steel looks like it will restore Superman to his rightful place as awesomest of the superheroes…but we’ve also been burned by Superman flops before, so it could go either way. But the giddy fangirl in me trusts C. Nolan and what I’ve seen of the trailers enough to think this one will be able to leap past failures in a single bound, and keep the perfect game in tact.

World War Z (June 21st) — Brad Pitt fights zombies. I bet that’s as far as they got in the pitch before a studio greenlit this movie and threw hundreds of millions of dollars at them to make it. This movie will be good (or at least good enough to sustain the streak).

That gets us through all the prominent mega-releases through June, July has several more obviously, so I’ll update then. Until that time, get your scorecard out and play along with us at home!

Agree? Disagree? Found something I missed or aren’t as optimistic about this summer’s chances? Make yourself heard in the comments section, or on the various social medias, and then come watch some movies with me. I’ll even let you buy my ticket.

…Want more Mind Bullets? New posts go up every Wednesday at noon PST (or as close to that as I feel like), and you can subscribe if you want them delivered right to your inbox. Or if you’re too impatient to wait that long you can follow me on twitter, instagram, youtube (new videos every Monday), and my boring personal website. Whew, that’s a lot of self promotion…even I don’t like me enough to keep up with all that.