So I got an email from my Uncle Hank a little while back, filled with all the pictures from our extended family Christmas party. Great shots of the whole family, everyone really enjoying themselves and getting into the holiday spirit, food, fun — there were even some candid shots of everybody singing around the dinner table.  There’s only one problem: I do not have an Uncle Hank. I don’t have an Uncle Hank, I don’t have a step-Uncle named Hank, I don’t have one of those close family friends who isn’t related to you but your parents refer to them as “uncle” anyway — I don’t even know anyone NAMED Hank. The closest association I have to someone named Hank is Captain Kirk’s buddy, the doctor character from the original Star Trek — a show I’ve never actually seen, but still have the misfortune of being aware of thanks to the pop-culture machine that raised me.

After a rudimentary examination of the email to make sure that it wasn’t the .00001% of spam emails that make it through both gmail’s spam filter and Apple’s junk mailbox, I saw that the fellow recipients of this Christmas recap email (which contained a whopping 21 full size picture attachments) all seemed like legit people as well. Although for the record, I’m not related to an Eileen Heveron, Margaret Heveron, or Robert Heveron, either. Now I love my family very much, but I thought it might be fun to take a photo-tour through the Christmas party of the family I’m not related to. And in an age where every embarrassing thing you do needs to be captured on the internet where it can be preserved for all time, why not post Uncle Hank’s faux pas on the blog for the whole world to see? I mean after all, any of you have better odds of showing up in these pictures than I do.

Ok, so this looks like the standard “Everyone has arrived, but before we’d gotten through the small talk” picture. First thing that jumps out at me: there are a frighteningly small number of people involved with this gathering to have accidentally sent these pictures to the wrong dheveron@gmail.com. Also worth noting, there are a shockingly small number of Heverons in general to have sent 21 Christmas pictures to the wrong Dustin Heveron (which is what Uncle Hank has me listed as in the “To” column, so we know it’s not an issue of thinking I was Daniel Heveron or David Heveron or something).

Now it appears as if we’ve moved on to the “Look at old pictures that no one finds interesting while we all eat cheese and grandpa naps” picture. A classic for any family function.

We’re done with all the required pleasantries at this point and it looks like we’re ready to chow down on a massive Christmas feast that consists entirely of…a salad bar? And a couple loaves of bread? No really, look around the kitchen, there’s literally nothing else to eat anywhere. Well at least we can see where the infamous Heveron skinny genes come from (I’ve chosen to spare you all a pun about Heveron skinny jeans here, so you’re welcome for that). Note: unlike these folks, my branch of the Heveron Family tree discourages picking one’s ear at dinner time (or any time, for that matter). People like this are why professional salad bars have that little glass roof over them. To prevent you from having to wonder what percentage of the bleu cheese came from cousin Robert’s ear.

On to the main course, which according to this photo is mustard, sea salt, and red wine. And people say Americans don’t pay attention to the food pyramid. Also, thank God someone brought and set up that old-timey microphone so we could record grandma’s famous instructions for cooking Sea-Salt Mustard and Red-Wine casserole.

…Well, I guess it’s pretty much time to call it a night and send everyone on their merry way home— except for, wait a tick, what’s this:

That’s right, grandpa and Uncle Bob decided it’s time to BUST OUT THE SHOTS! Drink if you wore a horribly-patterned ascot! Oh yeah, this party is in full swing now! This is the first picture where I finally see the family resemblance: rampant alcoholism.  …In their defense though, someone did just play that LMFAO song on their…

Extended-neck ukulele. Mele kalikimaka, mothertruckers. For those about to rock, we salute ukulele.

With hearts full of laughter and glasses empty of booze, even grandma can’t help but bust out a ukulele-fueled chorus of Pokerface. 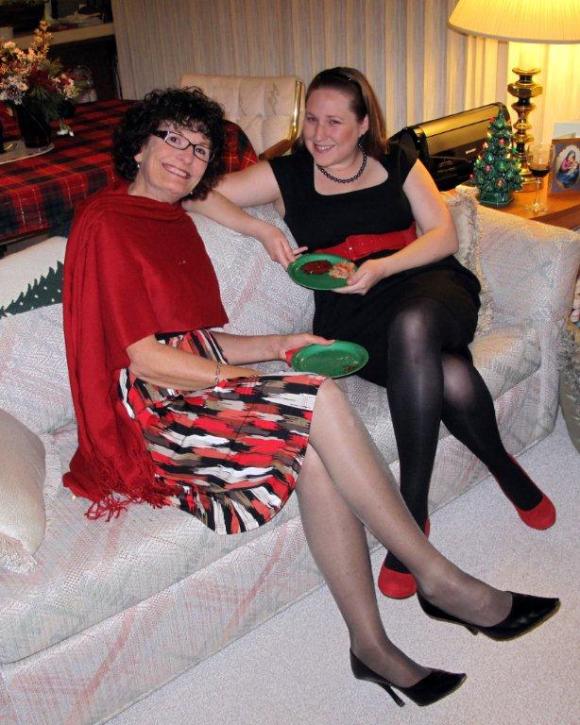 Oh, and also these two ladies were there, but only in this one picture — and they’re not doing anything particularly funny, unless you count the fact that they’re sitting awkwardly close for a couch that clearly has so much unused space.

And so ends another Heveron family Christmas party…it might not be the craziest party on the block, but at least it’s not Hanukkah.  And as I’m sure this total stranger to me is fond of saying, “Y’all come back now, ya hear?”

"Just make sure you send these pictures to cousin Dustin!" "Are you sure we have a cousin Dustin, grandma?" "Oh sure we do...just 'cause you're not related doesn't mean someone's not your relative." "Actually, that's exactly what that means, grandma. Take your meds."

Unimportant note: joking aside, I find the young brunette who pops up in a couple of these pictures mildly attractive, so I hope that these people really aren’t distant relatives or anything, ’cause I’d hate to have a Les Cousins Dangereux situation on my hands (I like the way they think).

I guess the real moral behind this whole post is that you should never trust a message from someone whose email signature is (sic):

And remember kids, always double check that you have the correct email addresses for your family, friends, and loved ones…or your well-intentioned picture email might end up fodder for some wise-ass kid’s blog.