Rock Out with Your Barack Out

“Blah blah blah, recession, blah blah, bailout, blah debates, blah blah, crackwhore.” That’s a recent quote from Vice Presidential candidate Joe Blahden commenting on one of his opponents, Sen. John McBlah. Politics are lame, politicians are uncool. But mostly I’m just jealous that there are people out there getting paid big money to fabricate half-truths and rewrite history to make themselves look better and I’m not one of them. And all that cynicism and negativity was BEFORE I realized that the debates are preempting a new episode of The Office. Imagine how cheery I felt after not getting my Dwight fix. Luckily, It’s Always Sunny in Philadelphia is a new one tonight, so maybe they’ll save me.

-Quarter-season FFL Updates-
Left Coast Losers: after getting shafted on losses of less than 1.8pts, the Losers live up to their name and drop to a 1-3 W-L record. However, it was a massive day of trades as I swapped out pretty much the entire team for a collection of guys that should be able to perform better in the long run.

Los Angeles Larcenists: Things are shaping up a little better for this team, as we’re at 3-1 so far — hopefully we’ll keep going strong.

Frodo’s Frozen Brogurt: I can’t figure out why exactly, but this team is getting dominated week after week, and I’m pretty much the league bitch at this point. With both of my starting quarterbacks on bye this week, it looks like it’s gonna be more of the same. I’m just glad this team is in the league where we play for pride and not money, since I can afford to lose pride…money, not so much.

-San Diego SuperChargers-
If you haven’t had a second to peruse my latest picture albums, I had a pretty baller trip to San Diego last week to see THE Brett Favre and his new green team of costars fall to San Diego’s hot-footed #21 and the unstoppable offense of the Chargers. As if seats just a few rows off goal line weren’t enough to get excited about, Mr. Thomas Murray (personal friend and benefactor for all Charger-related endeavors) even hooked it up so we could score a trip to the broadcast booth and spend a couple quarters hanging with Marv Albert and Dennis Green (subbing for my lifelong idol, Boomer Esiason). Basically I don’t have a better word than “awesome” to describe this day and event, so I’ll just leave it at that. It was awesome. And Tom Murray, wherever you are, I owe you one. Big time.

-The End is Not the End…It’s Just the Beginning-
House of Heroes has a new album out called The End is Not the End. I have no higher endorsement for any band or any music anywhere than for these guys and their latest masterwork. These is something on this album for everyone, but it does it without being the broad, pandering crap that largely dominates the pop charts (I’m looking at you, Katie Perry). This album is Queen’s Night at the Opera for the iPod generation, and anyone who likes great writing, awesome melodies, tight harmonies, purposeful songs, catchy hooks and good, ol’ fashioned, sing-along rock will love this album. It’s 15 tracks for less than $10 at the iTunes store, or you can pick it up from the guys directly at any of their live shows (which are also awesome). They’re touring with pop-punk sensation Relient K for all of October, and you can find more info at http://www.myspace.com/houseofheroes or http://www.thehouseofheroes.com — as an added perk of knowing these guys I’ve had an early copy of the album since late last year, and it still barely leaves my CD player, almost one full year later. If you’re really into owning a hard copy of the CD, you can also buy it online at zambooie.com: http://www.zambooie.com/productResultsband.tpl?cart=12200435901506059&bandname=House%20Of%20Heroes&startat=1&directionsort=as&sortfield=band Trust me, you won’t forgive yourself if you don’t pick this one up ASAP.

Ok guys, time to rock out some late night happy hour at McCormick & Schmick’s. It’s time to get tasty. 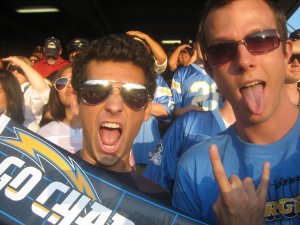 One thought on “Rock Out with Your Barack Out”