Sharing the Laughter and Love, as the Seavers Might Say

If you’re not married, your lovelife probably isn’t perfect. If you are married, then your lovelife definitely isn’t perfect. As someone whose IQ score soars well into the double-digits, my family and friends have always found me to be the perfect confidant and counselor for the trials and tribulations that arise in their lives and loves. It’s with this in mind that I’ve decided to publicly answer some of the oft-repeated questions that have been asked of me over the years. Today’s question comes to us in a letter from Eleanor Rigby of Boise, Idaho:

“Dear Dustin,
I was with my boyfriend recently, picking up the rice in a church where we had just attended a wedding, and I wondered, when’s the appropriate time to change my facebook (and less importantly, myspace) relationship status from ‘single’ to ‘in a relationship’? We haven’t been going out for a terribly long time (just about eight weeks or so), and we’re definitely a long ways off from classifying ourselves a serious relationship, but we’re also past the point where we’re truly single (i.e. neither of us would consider going on a date with someone else). So how should we be classified by social-networking-website standards? Are we still single? In a relationship? Is it complicated? I need your advice!

On behalf of all the lonely people,
-E.R.”

Well Eleanor, let me preface this by saying that no two couples (or relationships) are exactly alike, and each couple should discuss and use whatever relationship status-setting makes them feel most comfortable about their relationship. That said, here are some general guidelines to help bolster the lines of communication between you and your significant other.

Single:
This should be everyone’s default status, and is acceptable to use from dates 0-8 or any relationship less than five weeks old. As a “single” you’re free to date whoever you want, whenever you want, in whatever quantities you want. But, while your status is single, you also waive your right to not be hit-on and/or flirted-with by your peers, friends, teachers, homeless people, family members and various government officials (I’m looking at you, Spitzer).

Hidden Status:
This is where you take down your relationship status entirely, so that it doesn’t even show that part of your profile. Though most people assume this means you are taken — or at the very least aren’t looking for anything romantic — the handful of people who have an entirely delusional and unfounded/unreciprocated crush on you will still assume they have a shot at dating you if this is your status.

In A Relationship (no name):
This is the next level of progression, and is ideal for dates number 8-20 or any relationship that is between seven weeks and three months in length. It is mostly used as a deterrent to other would-be suitors, but is also ideal for people who don’t want everyone on the internet “all up in their business,” or judging them for who they’re dating. It also applies to people that are dating someone who doesn’t have a facebook (the poor schmucks who only have myspace don’t know what they’re missing. If you’re going to enter into a relationship with someone who is a myspace-only person, you should try your absolute hardest to convert them to facebook before you make anything official. I know, it sounds petty now, but trust me, this can be the exact kind of sticking point that can lead to an ugly divorce 20 or 30 years down the road. I’ve seen it happen a million times…poor schmucks).

In A Relationship (showing other person’s name):
This is the biggest social-networking relationship step yet; it’s a public and legally-binding declaration of your commitment to one another, and is perfect for any relationship between three months and three years in length. At this point in the relationship, it’s pretty standard etiquette to also change your “Looking For” section to just friendship — and maybe networking, too — but nothing more than those two, max. It should also be noted that anytime you see two women who are in this kind of relationship status, it almost always means that they are either recently-single and/or mildly-insecure, so they use this as a means of overcompensating and feeling better about themselves. They also manage to convince themselves that they are the first pair of women to have ever come up with this idea, and that it is hilarious and original. Sadly, this is not the case. Unless both chicks are hot.

Engaged:
If you’ve been dating someone for longer than three and a half or four years (mind you, this count doesn’t start till after you graduate from high school), then you should be engaged. Or at the very least, pre-engaged. A standard-length engagement is somewhere between 8-18 months. This gives the bride the requisite three weeks to make all the arrangements and plan the wedding, accompanied by the mandatory one year or so to constantly complain that “things will never be ready in time,” “I’ll never fit into my wedding dress,” and that she has “had to plan this whole [expletive] wedding by her [expletive] self because she can’t get any [expletive] help from anybody” (if you are married and you took offense to any of that, then you are the exact kind of bride I am describing).

Married:
If you’re on facebook and you’re older than 34 years old, this should be your relationship status, regardless of whether you’re actually married or not. Because if you’re in your mid-to-upper 30’s and you’re single AND you spend your free time on facebook, then you are a pedophile, plain and simple. Switching your status to “married” will prolong the amount of time it takes for the feds to hunt you down and lock you up for being the sick, pokemon-loving son of a B that you are. Note: the same tirade from the previous paragraph also applies to any two obviously-straight women who are listed as married to one another.

It’s Complicated:
This is not an actual relationship status, and everybody knows it. Anyone who legitimately tries to pass this off as their relationship status is either,
A) in the process of breaking up, and it’ll be changed to single or hidden within a week,
B) in the process of getting back together, and it’ll be changed to hidden or “in a relationship” within a week, or
C) are cheating on their partner and/or are in a long distance relationship, but don’t want to fully commit. This is also the preferred status of overly-emo kids who think that they’re the first people in the history of all mankind to ever experience unrequited love or a bad breakup. Look for lots of black-and-white profile pictures from these kinds of people, as well as depressing song lyrics in their “About Me” sections.

…And that just about covers it. I hope this guide has provided some helpful insight for everyone, and remember: it isn’t true love until it’s been posted on one or more social networking websites. Just like the Bible says.

Until next time I solve all your problems,
Dustin “I Put the Sing in Single” Heveron 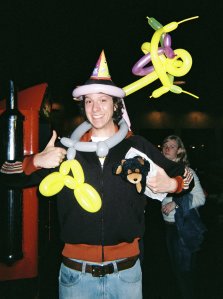