A wise monk by the name of Hugh Downs once said, “the best way to apologize for any wrongdoing is to simply pretend it never happened in the first place.” So rather than apologize for not updating this guy in almost two months, I’m simply going to ignore my negligence and continue as if I’ve done nothing wrong. So far, so good.

In a little more than a week, I will have been in LA for three full months. That means in the coming days, I’ll be starting my second trimester as a resident of southern California. Obviously, I’m curious about what to expect in the next trimester, and I’m sure you are, too. In order to put myself (and you) at ease, I’ve done a little research on what we can expect during the second trimester of LA living. For the ease of the reader, I’ve changed all the occurrences of the phrase “the baby” to the much more interesting descriptor, “Dustin.”

Week 13: You can’t feel it yet, but Dustin can move in a jerky fashion — flexing the arms and kicking the legs. This week, Dustin might even be able to put a thumb in his mouth. Dustin’s eyelids are fused together to protect his developing eyes. Tiny ribs may soon appear.

Week 14: The effect of hormones becomes apparent this week. For boys, the prostate gland is developing.

Week 16: Sixteen weeks into your journey, Dustin weighs a bit less than 3 ounces. He can now make a fist. Dustin’s eyes are becoming sensitive to light. More developed facial muscles may lead to various expressions, such as squinting and frowning

Week 18: As the nerve endings from Dustin’s brain “hook up” to the ears, he may be startled by loud noises. Dustin can swallow this week, too.

Week 19: Dustin’s delicate skin is now protected with a pasty white coating called vernix. As Dustin’s hearing continues to improve, he may pick up your voice in conversations — although it’s probably hard to hear clearly through the amniotic fluid and protective paste covering Dustin’s ears.

Week 21: Although the placenta provides nearly all of Dustin’s nourishment, Dustin will begin to absorb small amounts of sugar from swallowed amniotic fluid.

Week 22: This week, taste buds are starting to form on Dustin’s tongue, and Dustin’s brain and nerve endings can process the sensation of touch. Dustin may experiment by feeling his or her face or anything else within reach.

Week 23: The testes begin to descend from the abdomen this week.

Week 24: Sense of balance develops. Thanks to a fully developed inner ear, which controls balance, Dustin may have a sense of whether he is upside-down or right side up. You may notice a regular sleeping and waking cycle.

Week 25: Dustin’s hands are now fully developed, although the nerve connections to the hands have a long way to go.

Week 26: The hair on Dustin’s head is longer and more plentiful. Although Dustin’s eyes are fully developed, they may not open for another two weeks.

Week 27: This week marks the end of the second trimester. Dustin’s lungs, liver and immune system are continuing to mature — and he has been growing like a weed.

There you have it. I know I learned a lot, and I’m really excited about some of the things I have to look forward to (especially that sense of balance!) in the coming weeks.

I promise to have a more legitimate update for you starting tomorrow, as the clamor for what I’ve been up to has risen to an all-time high. The masses have spoken, and they want more Dustin (and really, who wouldn’t?), so I must deliver. 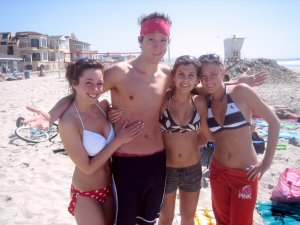 This is where babies come from: the beach.